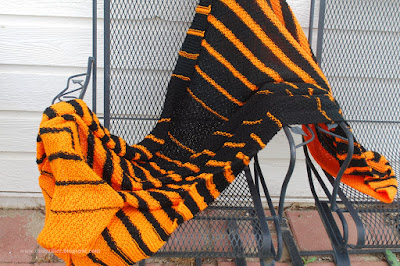 I crochet and knit blankets and afghans for Project Linus. This is one I made earlier this year that works quite well for Halloween, doesn't it?

Work on the hoarder house is just about complete. Hubby and I sold and closed on the house this month. It has been a long and hard year. I hope that none of you will have to do this type of thing. It is one thing to deal with a death were the person has everything in order but this wasn't one of those.

I hope all the family will accept the amount of inheritance as "anything you get is profit", but there will be one person who I believe will complain that it wasn't enough. Doesn't it seem that there is always one in the family?

I'm quilting away on quilts that have been stacking up. I love using the Crayola Washable Markers to mark a quilt top before quilting. I haven't had any problem with them not washing out until this quilt and I noticed that on one certain fabric the marker that I used (was it the brown one?) left a shadow. It washed out in a subsequent washing. I've heard that the yellow? (or was it orange?) is tricky.  I haven't used those 2 colors so I think I'll test them. Have any of you tried the markers? What did you think?


I'm crocheting a sweet little pale pink blanket for Project Linus. It isn't finished yet, so there is no available photo. 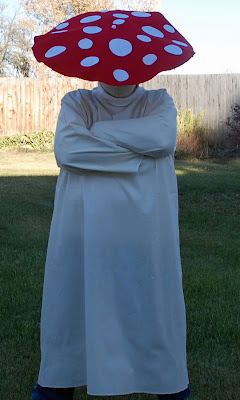 Of course, I made my own Halloween costume again this year. I was a hallucinogenic mushroom. What an easy costume to make! I didn't win any of the prizes at the Halloween party but DH won second place for his pinstriped mobster. Woohoo hubby!

We are currently experiencing the second of two winter storms here. The streets were really icy on the drive home. I remember how to drive in ice and snow but there are so many transplants here that it is dicey with all the new drivers to snow.

My car is slowly dying. I think there is a leak in some gas vapor regulator (it's the gas pressure regulator) because at certain times I can smell gas in the interior and outside right at the windshield. It also started to not release the key from the ignition. We solved that problem by popping out a plug on the steering column and inserting a pen to push up a release. With the other hand turn the key off and remove it. Not ideal, but it works. I need a new vehicle.


at 4:20 PM
Email ThisBlogThis!Share to TwitterShare to FacebookShare to Pinterest

All content and images (unless otherwise noted) are copyright ©2012 Paula, the quilter