The snow from the Thanksgiving storm still lingers around. The side roads are almost impassible. I thought I was going to get hung up on a big ice hill when I left the bank today. It's a good thing this car is going to be used as a trade in for a newer vehicle, because these roads are beating it to death.

The Hubs and I totally rearranged the living room to make a spot for the Christmas tree. The funny thing is that we both like the new arrangement and will probably keep it like this even after Christmas.

My trigger thumb is not getting any better. Thank goodness I have an appointment with a hand doctor on Tuesday. Are you curious what trigger thumb is? Trigger thumb is a condition that causes your thumb to get stuck in a bent position. Trigger thumb causes stiffness when bending the thumb or hear snapping and popping when moving it. I have both. I have stopped ALL handwork. But I've been reading a lot more and doing simple chores. Nothing that involves lifting because I don't know when the thumb will give out and whatever I'm holding with crash to the floor.

There were two problems with my car that got fixed. One was very inconvenient and involved poking a pen or other narrow item into a hole in the steering column so the ignition could be totally turned off and the key removed. The other was more serious in that there were no brake lights. A new wire here and a new brake light switch there and $$$ the car is fixed. For now. Things are starting to go wrong at an alarming rate with this vehicle so it is time to get rid of it. Car shopping. UGH. 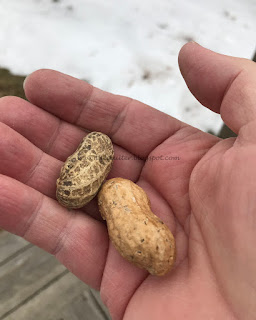 Look what I found in the engine compartment of my car. I popped the hood to add some windshield washer fluid and I found one in each corner tucked up by the firewall. Silly squirrels. I remember when I was a teenager my mom's car wouldn't start. We lived in the mountains and she always parked in the garage after a horse nibbled the rib of her convertible top and she had to replace it. Anyway, the car wouldn't start, so Dad popped the hood and removed the cover of the air filter. No wonder it wouldn't start! The air filter was packed to bursting with dog food. It was mice that time.

And so, several days before Christmas, the furnace starting acting strange. After a call to an HVAC company, it turns out that the thermal coupler was going bad. New coupler = happy quilter. We have the kids and grands coming and no heat was not an option.

Now it is the last day of 2019. I can't stay up late any more so the Hubs and I usually don't go out on New Year's Eve. We did, however, go to a movie today. We went to a new theater in town that is dine-in. Yes, you read that right!. There is a button on the heated recliner to summon a server. The server takes your order and swipes your card. Soon, your order comes out. The Hubs ordered popcorn and a soda. That was a good thing because I can't imagine trying to eat nachos or a brat in the dark; I can't keep food off the front of me in the light. What did we see? The latest Star Wars movie - Star Wars: The Rise of Skywalker. It was good. It was loud. My recliner vibrated with the sound.

at 6:57 PM
Email ThisBlogThis!Share to TwitterShare to FacebookShare to Pinterest

All content and images (unless otherwise noted) are copyright ©2012 Paula, the quilter